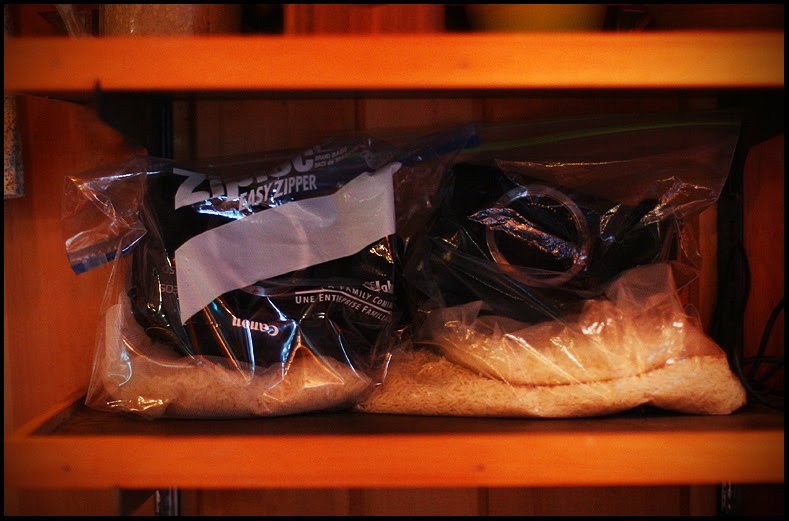 so… in case this is a difficult photo to read, you are looking at two canon 5d’s, both in their own sealed plastic bag, along with uncle ben’s rice. it all started with a really bad movie. the hangover. i brought a movie projector up to the cabin in ely, and we thought it would be a great idea to project the hangover on the side of my parent’s huge 8 person tent. all (ten) of us gathered inside to share the experience of wasting two hours on a really bad movie (apologies to those of you out there who loved it).

max brought a rather large glass of water into the tent, and at an early point during the movie i asked him to set it down (selfishly motivated by wanting him to put his arm around me, which isn’t such an awful thing to want). he protested saying that it would get knocked over, i assured him that it wouldn’t (you can see where i made the mistake), and at some unknown point during the movie… our cameras, which were both unfortunately resting near said glass of water, were soaked. and of course, as is always the way, it was our first night of vacation.

the water was knocked over, and ran toward a corner of the tent and pooled. max’s camera was sitting in about a half inch of water, while mine just seemed to be in it’s path.

at the end of the movie, after discovering the aftermath of the hangover (typical), we immediately took the batteries and cf cards out of the cameras… took off the lenses and left them in the open air for about 2 hours. max has actually been through this before with the same camera body (imitating a star wars move while kayaking) and he had success with putting the body in a sealed plastic bag with rice. i guess the rice pulls the moisture out of the camera body over time… so we tried it.

my camera didn’t seem to be nearly as wet as his, and i had been secretly telling myself the whole time that mine would probably be fine. when will i learn to always expect the worst?!? after my camera had spent one night in the plastic bag, i attempted to put the battery in and turn it on. forehead wrinkled and biting my lip, i looked at the status window on the top of the camera for a sign of hope. blank. my heart sank… and thinking that neither of us would have a camera anymore was more than stressful. i cried.

max remained unbelievably calm, which after a few hours, wore off on me too. we decided that we would keep the cameras in the plastic bags until the end of our trip, and then see what happened.

i had a backup 30D that we both shared for the rest of the time, which was actually nice. at least when i saw a picture i was able to shoot it, instead of being so viscerally reminded that i may be without a quality camera body for an unknown period of time.

we kept the cameras in their rice body bags for the duration of the trip, and on the sixth day, max’s camera actually showed signs of life. it turned on and appeared to be in perfect working condition!! i was still too scared to attempt mine, and let it go one more day. on the seventh day, i couldn’t let it rest any longer… i put the battery in, and POOF. turned right on like magic. like new. no signs of water damage whatsoever. i was so relieved… and i still can’t stop shaking my head in amazement.

so… the moral of the story is… don’t watch bad movies. the way i see it, if the hangover was actually good, i would’ve been preoccupied with watching the movie instead of wishing my boyfriend had his arm around me, and this whole thing could’ve been avoided! on the upside, at least the side affects of the hangover only lasted seven days. ;)